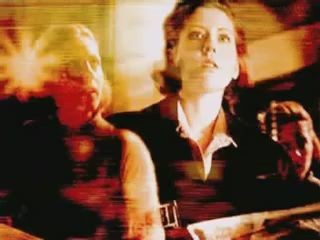 Summary: Romance/Angst. Kim , Skinner’s secretary, reflects on loving Skinner from afar. Made for a friend who was a Kim fan.
My Rating: Two stars, mainly because of the multiple Kims – that makes it a bit jarring. Within that limitation, though, it’s quite a sweet touching video. Good integration of the song and the clips, particularly given the limits of footage. An oldie but a goodie, but probably only of interest if you’re into obscure characters.
Geeky Things To Note: This video was a favour for someone, and although I’m experienced in making the best of limited footage, this was a challenge even for me. I enjoyed it, though – more than I thought I would.
Programs Used: VideoMach, Paint Shop Pro, CoolEdit, RealProducer.
Sources: Anasazi, Piper Maru, SR819, Bad Blood.