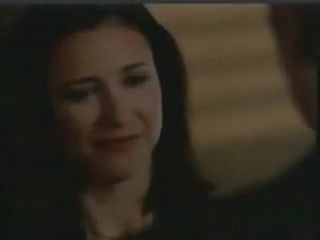 Summary: Angst/Romance. Diana POV on loving and losing Mulder.
My Rating: Four stars. One of my favourites. Even if you’re not a fan of this pairing (don’t laugh – some people are), this one is definitely worth a look.
Geeky Things To Note: Some layered footage, used to better effect than in Standing In The Way. I’m starting to get a better feel for what tones and shots will work in layers and what won’t. I like the overlay of Diana speaking during the opening titles – that scene has always struck me as a very naked one, emotionally speaking, in which we see the character stripped bare of all pretense and barriers because of what she knows about what Mulder can see. It’s for that reason that I’ve bookended the rest of the footage between clips of that scene. It’s not quite flashback, because some of the footage comes from after that scene, but in an atmospheric sense that was the idea I was shooting for. The song, funnily enough, was originally suggested to me by Sally-Ann Maslen for Krycek and Marita, but musically that never seemed to come together. What I like about this song is that, while acknowledging overtones of loss in a relationship, it also honours the strength of the bond, and I perceive that very strongly between Mulder and Diana.
Programs Used: VideoMach, MGI VideoWave, Adobe Premiere, Paint Shop Pro, CoolEdit, RealProducer.
Sources: The End, The Beginning, Two Fathers, One Son, Biogenesis, Sixth Extinction, Amor Fati.