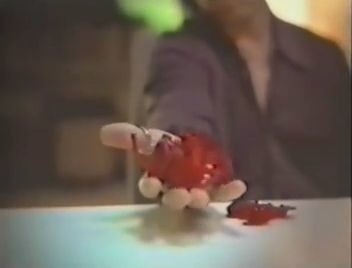 Summary: Angst/Romance. A Krycek/Marita montage shown in retrospect; the couple are apart, reflecting.
My Rating/Remaster Notes: Five stars. I remastered this video in July 2003 because it was to be exhibited in the Special Effects event at VividCon. The video is largely the same, just recaptured with better quality source footage for full screen viewing. However, there are a few small changes. The main one is the colourisation. The video has three “time zones” – the present (Marita walking, Alex sitting toying with the rose, both reflecting), the recent past (XF canon events), and the distant past (young Alex and Marita falling in love, cribbed from old footage of the actors in other roles). Previously, I had the present in red tones, the recent past in normal tones, and the distant past in pastels with a white overlay. This time around I followed the colour spectrum – the present was in boosted reds, the recent past with slightly boosted reds and yellows, and the distant past in boosted yellows. I don’t know how effective this is, but I like it. I did find replicating some of the special effects difficult, however, and I’m not completely happy in a couple of instances (particularly the blink). I also had to use new special effects in a couple of places – I no longer had access to Patient X footage without the subtitle credits, and there was a subtitle over the top of Marita’s black coat, so I wound up concealing them with a green screened blob of masking black. Because the video was chosen for the convention in its original format, I decided not to toy with it too much, but there are still a couple of things I would like to change. Still, it remains a favourite of my own work, so it’s nice to see it again, and to be able to watch it at full-screen with some semblance of quality. The old version is still available here if you want to compare them. Programs Used: VideoMach (original), MGI VideoWave (original), Adobe Premiere (remaster), Paint Shop Pro, CoolEdit, RealProducer.
Sources: Earth Angels, Once A Thief, The Raffle, Expect No Mercy, Teliko, Unrequited, Requiem, Patient X, DeadAlive, Zero Sum, others to Existence.