REMASTERED: Mary (2003/2012)
Performed by Patti Griffin
Theme: Buffy’s Drusilla. Self-portrait, playing with the idea that Dru retained some of her innocence despite being transformed by Angelus.
Nummy Treat Award Nominee
Runner Up, Best Character Vid, Round 50, Driver Picks

My Rating: Five stars. I’m thrilled to bits with this one.
Background: This video is inspired equally by Betsy Dodd’s Scully video to the same song, and by Linzee’s gorgeous Spike/Dru vid, Jaded. (In fact, without Linzee, I would never have gotten hooked on Dru at all). The video is consciously surface-contradictory, pairing a slow-and-gentle song with an eccentric and often demented character; nonetheless, I think it worked out really well. The ‘Mary’ designation is literally accurate as well as figuratively; women religious in that era traditionally chose new names beginning with Mary (for instance, Sister Mary Cecelia).
Geeky Things To Note: There are a few overlays here where I needed to convey a lot in little time. For instance, “You’re covered in babies” has overlapping shots of Dru’s dolls and Dru talking to them, because there wasn’t enough time to cut from one shot to the other, and neither shot conveyed the message on its own. I also strove to avoid, as far as possible, shots of Dru or Spike in vamp form. The first draft contained one close-up of Vamp!Dru, and it badly undermined the theme of the video. So that went on the cutting room floor.
Programs Used: Adobe Premiere Pro CS5.
Sources: Buffy and Angel. 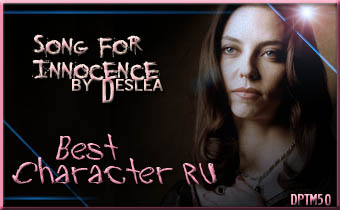