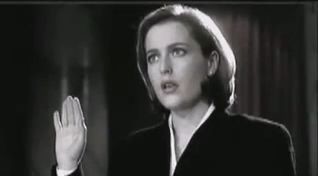 Summary: An advertising/fill-in-the-gaps trailer ad for a virtual series project.
My Rating: Four stars. I love this one. I think it did what it set out to do especially well. There’s really nothing I’d change about it. I owe BDodd for this one – her Scully Marathon trailer was a big inspiration.
Background: This video is a trailer for a new virtual series project, X Files: VCU (Violent Crimes Unit). The series is set eighteen months after the end of the show, and there is a backstory to explain how it is that some supposedly dead characters are back, and how the characters have come to be working on the X Files as ordinary agents again. The object of this trailer is to sketch out that backstory, and make clear from the footage which agents are back, without those of us writing the series needing to write reams of exposition explaining how we got from there to here. So, there’s a one-minute monologue voiceover with matching, low-saturated, eroded footage. Then the backing music swells to a crescendo, and the footage switches to colour, high-action casefile-type footage.
Geeky Things To Note: In terms of advanced techniques, there is audio mixing (voiceover plus edited music). One thing I did was move down the footage of Scully testifying to block out the subtitle credits. I had to do some image pan work for the same reason for the Duane Barry newspaper clipping footage as well. The Jeffrey/Diana footage against “the conspiracy is no more” is from a deleted scene that never made it to air – a scene I rather like for its implications about their working partnership. The voiceover is my voice, and I had my doubts about it. Oddly, other Australians who heard it found my accent more discordant with the material than American viewers. It works okay, but I did attempt to get an American friend to re-dub it. In the end, it wasn’t worth the hassle of re-cutting the footage, so we left it. I also had to use black bars to create the illusion of widescreen in early-season footage (the X Files DVDs switched to widescreen in Season 5). In some cases I had to move footage in order to make the important elements (faces, for instance) appear in the right spot. One thing this one emphasised was how important it is to get not only cuts in the right place, but movements in the footage itself to complement the music. This video will form part of the 2003 Vividcon Nearly New exhibition.
Programs Used: Adobe Premiere, Paint Shop Pro, CoolEdit, RealProducer.
Sources: X Files episodes plus deleted footage from the DVD sets.