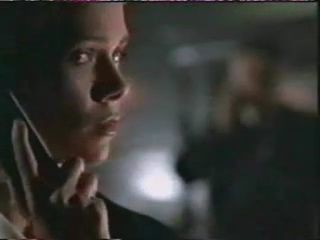 Summary: Angst. A Krycek/Marita piece themed on Krycek’s desertion in One Son, Krycek POV.
My Rating: Three stars. This video probably fails the technical merit test for average audio quality, but it has a high feeling factor and is a good demonstration of the music video as a vehicle for storytelling. Now that I’ve sorted out most of the niggly problems that annoyed me about this one, it’s one of my favourites.
Geeky Things To Note: Buffy fans will recognise this song as Giles’ solo in the episode Once More With Feeling. As usual, I sneaked in some non-XF footage, and this time you’ll note overlaid semi-transparent footage as well. I’ve been playing with Adobe Premiere. I haven’t really mastered good use of layered footage yet, but not a bad effort with new techniques. (In the remastering process I removed a couple of layers which I considered ill-advised, as well as fixing some lighting and colour problems and changing the titles). Probably the most interesting challenge of this piece was editing out the background noise from the audio, which was taped direct from TV. There were several clanging sounds where Buffy dropped and threw things while Giles sang. I edited these with laborious microsecond cuts and splices. In terms of composition, I was careful to use only pre-One Son footage, since this video is very much a story set as Krycek walks away from Marita. The one exception is a clip of Krycek killing CSM in Requiem, which is presented as a fantasy rather than a reality – that of killing one of Marita’s demons. There’s an in-joke: To the line “wish I could play the father”, there’s a clip of Nick in The Impossible Elephant, where he plays the widowed father of a young boy.
Programs Used: VideoMach, MGI VideoWave, Adobe Premiere, Paint Shop Pro, CoolEdit, RealProducer.
Sources: One Son, Patient X, Red & The Black, Teliko, Zero Sum, Requiem, Once A Thief, Buffy.