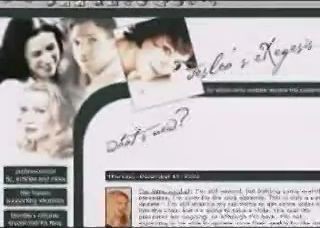 Summary: A trailer-style promotional piece for my websites, made for a challenge at P2K Forums.
My Rating: Three stars. This one is pretty average, and it’s more for novelty value than anything, but I had fun making it. But it’s worth noting that in a lot of ways, this was a stylistic precursor to the XFVCU trailer (they use the same music, as well), and in that sense, it was a very formative exercise.
Geeky Things To Note: This one was good fun to make – a fairly simple display of various page designs (still GIFs), with image pan and other filters to create the illusion of movement, along with music and some vocal audio overlay. The vocals are myself and Chris Carter discussing the Thank You Chris Carter project in 2002 and a promotional Nick Lea clip. I owe both the music and basic inspiration for this one to Betsy Dodd, who made a similar trailer clip to the same music for the Scully Marathon in 2001. There’s some audio mixing here, as well – extra sound from elsewhere in the song is overlaid with the main track. This was good fun!
Programs Used: Adobe Premiere, Paint Shop Pro, CoolEdit, RealProducer.
Sources: Still images of my websites, plus audio of my telephone conversation with Chris Carter and audio from a Nick Lea interview.